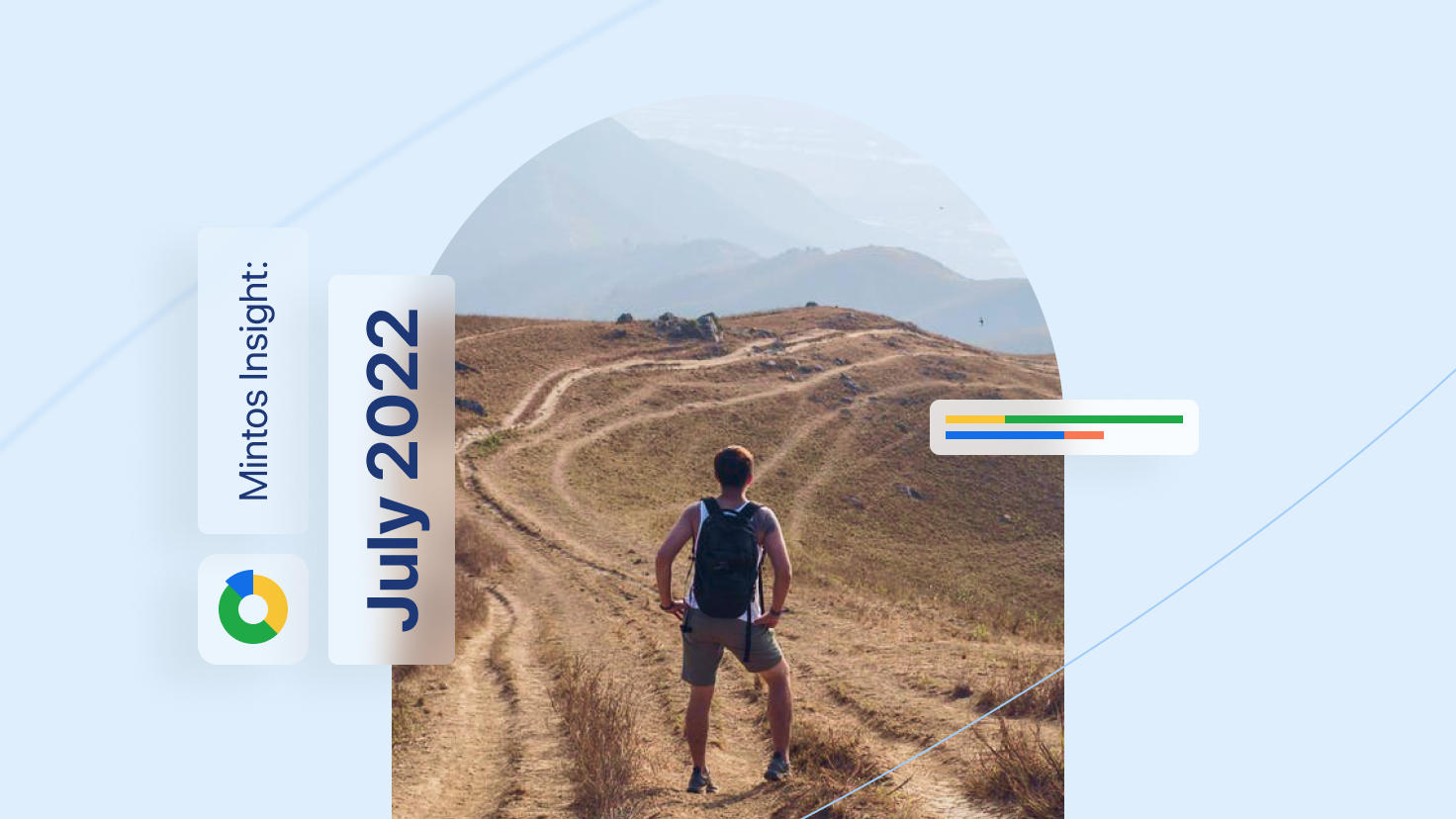 Welcome to Mintos Insight, our monthly publication that summarizes what’s been happening on Mintos, including broader market commentary, educational topics, and more!

Make sure you receive the Mintos Insight monthly by signing up for our newsletter.

It’s no secret that the terrain of the investment landscape has changed drastically in the first half of 2022. Inflation, rising interest rates, tighter monetary policies, and increasing geopolitical risks have resulted in an investment environment that’s quite different from this time last year.

Some assets, however, have held up better than others in these changing conditions. So to give you some insight into the performance of each major asset class so far this year, we’ve put together a high-level summary of their year-to-date (YTD) returns.

After a hugely successful 2021, global stock markets have been under pressure in 2022 as high levels of inflation caused interest rates to rise, affecting company earnings and global stock prices. According to FTSE Russell’s All-World stock index, YTD returns are around -11%1 (in EUR).

In the United States (where many of the world’s largest stocks are traded), record-high inflation has led to significant interest rate increases, causing its stock market to enter a bear market in June (when stock prices fall 20% or more). As a result, returns for the S&P 500 (which tracks the performance of the 500 largest U.S. companies) are sitting around -19%2 (in USD) for 2022.

The European stock market has also been challenged this year as the Eurozone continues to battle high inflation rates. The STOXX Europe 600, an index tracking the performance of major companies across 17 European countries, has recorded a YTD return of around -14%3 (in EUR).

Fortunately, though, some indexes have held up more strongly in 2022. For example, the FTSE 100, an index measuring the performance of the 100 largest companies traded on the London Stock Exchange, has only recorded a -3%4 (in GBP) YTD return.

In the current inflationary environment, it’s expected that further interest rate rises are on the way in several major economies. Therefore, hedge fund managers worldwide are already preparing for the stock market to continue on this bumpy road for a while longer.

Because of the inverse relationship between bonds and interest rates, bond yields tend to increase when interest rates rise. When this happens, bond values fall, meaning investors get back less money than they initially invested. So due to high inflation levels, this year has also been particularly challenging for global bond markets.

According to FTSE Russell’s world government bond index, the YTD return is estimated at -6.6%5 (in EUR). And their global investment-grade bond index states a YTD return of -6.1%6 (in EUR).

In the United States, the Federal Reserve has increased interest rates by levels not seen since the 90s, with one-day increases as high as 75 basis points7. As a result, according to FTSE Russell’s US investment-grade bond index (which includes their treasury bonds), the average YTD return is -11.6%8*.

In Germany, the 10-year government bond yield, which serves as a benchmark for borrowing costs across Europe, has increased over the past 6 months, meaning bond values have been steadily dropping. According to the Wall Street Journal, the yield rose from -0.1% in January to over 1.3% at the end of June9.

It’s been a big year for cryptocurrencies (crypto) in the investment market. Bitcoin’s price has more than halved since the beginning of the year, dropping from around €41k in January to around €18.9k at the end of June10. Tether (USDT), the world’s largest stablecoin used to execute half of all Bitcoin trades11, made headlines this year when it briefly became “unpegged” from the USD causing Bitcoin prices to tumble. So although Bitcoin may be a valuable inflation hedge, it’s proven to be volatile when there’s heightened uncertainty in the market12.

Plus, a lack of regulation in the market has added to the uncertainty surrounding crypto safety. According to the Financial Times, regulators have highlighted how the event with Tether (among others) is an example of how some rapidly growing products also have rapidly growing risks.

Because crypto is still a relatively new investment, there isn’t a long enough timeframe in which investment professionals can track the performance of Bitcoin (for example) across different cycles in the investment market. Therefore, it will be time that tells how and when the crypto market will bounce back from its current position.

Real estate investment trusts (REITs), which offer investors an accessible way to invest in real estate, have also come under pressure in the turbulent trading conditions of 202213. According to FTSE’s global REIT index, the YTD return is around -11%14 (in EUR).

Although REITs are typically thought to be a better hedge against inflation, the current volatility in the investment market has filtered through to the real estate sector. High inflation and tightening monetary policy have lowered economic growth expectations and corporate earnings across the board. This has affected REIT returns and restricted REITs from being able to grow their portfolios13. Although the impact on returns has differed regionally – Asian portfolios in the developed sector continue to earn higher returns than the EMEA and North American regions13.

The average YTD net return on Mintos (which has over 42% of the market share in Europe15) is 3.3%16 before we consider the effects of investments in Russian loans (see below for further explanation).

A significant part of the year has been characterized by the flow-on effects of the war in Ukraine, affecting the ability of Russian lending companies to transfer money to Mintos because of sanctions and restrictions. And even though it’s still difficult to predict (with certainty) the extent to which this has impacted investment returns, we’ve considered three general (and non-binding) scenarios, where we’ve made assumptions about possible outcomes:

Mintos recovers all or most of the current exposure in the medium to long term. A precondition to this is the lifting of some of the existing restrictions imposed due to sanctions and retaliation measures on sanctions by the Russian Central bank.

There are significant long-term losses and slight chances of any meaningful recovery. This arises because of the current limitations on the ability to receive payments from lending companies and the potential downturn in the Russian economy due to imposed sanctions.

The truth is that it’s not known how the situation will resolve. Currently, we estimate that it will most likely be somewhere in between the two scenarios above. Recoveries depend on the effects of sanctions and internal policies in Russia on the lending companies, the availability of alternative payment routes, plus the ability of the lending companies to maintain liquidity and solvency.

To estimate the potential impact on YTD returns in the realistic scenario, we’ve assumed a 50% loss (only for the sake of this example, there is still too much uncertainty to make any precise loss estimates). Taking this into consideration, the current YTD return on Mintos could decrease to -3.5%.

For the remainder of 2022, however, we have a positive outlook considering the attractive 14% average interest rate (in EUR) achieved at the end of June. So all else being equal, we expect the average net return to grow healthily over the rest of this year.

Although 2022 has posed some challenges for investors, as history tells us, global investment markets (and returns) do eventually return to a healthier state.

If this year has highlighted anything, it’s the fact that having a long-term view when it comes to investing can be highly beneficial. It can help investors focus less on short-term losses and more on portfolio performance in the long run. You can learn more about long-term investing and goals with our Investor Academy.

In June, around 274 000 loans were funded, equivalent to €48.6 million, and investors on Mintos earned around €2.4 million in interest at an average rate of 11.6%. The top 3 markets for investments in loans were: Latvia, Poland, and Spain. 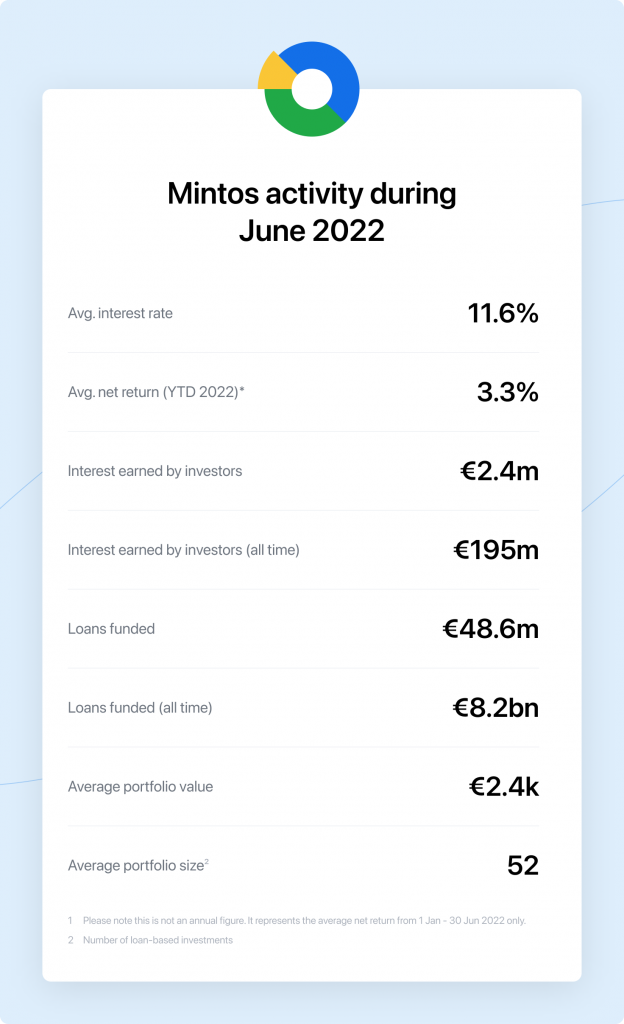 “During June, more lending companies were launched in the new regulated investment firm setup offering Notes. And in a couple of weeks, it’s expected that all of the remaining lending companies will also transition to offering Notes exclusively. Given the global bearish markets and low investor sentiment, the outstanding investments on Mintos decreased to €353 million during June. However, as loan supply continues to outpace demand, the average interest rate (in EUR) has now reached 14%.” – Peteris Mikelsons, Head of Partnerships at Mintos

Earn a €50 bonus for you and your friends!