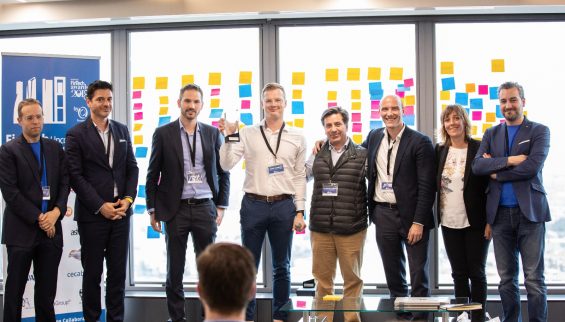 Latvian startup Mintos was named “Most Influential Startup” at the Spanish Fintech Awards 2018. The prize was awarded during the third annual Fintech Unconference, organised by Finnovating business strategy and investment consulting. Over 6,300 votes were registered for the award, with Mintos winning almost half of the votes.

The Fintech Unconference gathered the 100 most important CEOs and founders in the sector, 13 Presidents of Latin American Fintech Associations and representatives from financial supervisors looking for synergy and meetings with other industry players. Three other awards were also handed out with Goin winning “Most Innovative”, Revolut winning “Best Executed Business Model” and EthicHub winning “Startup with Most Social Impact”.

Mintos CEO and Co-Founder Martins Sulte: “We are so proud to win this award, which proves we have truly won the confidence of the public and our investors. Last year was an especially successful year for us, and such awards based on public support show that we are moving in the right direction.”

In more than three years since its establishment, Mintos has exceeded EUR 720 million in cumulative investments by investors and the company expects the amount of loans funded to reach EUR 1 billion by the end of the year.

The number of investors using the platform has reached 61 thousand as of May 2018 and the company expects to reach 100 thousand investors by the end of the year.

About a year ago, we introduced Mintos Invest & Access,... END_OF_DOCUMENT_TOKEN_TO_BE_REPLACED

We are publishing the Mintos Holdings Consolidated annual report to... END_OF_DOCUMENT_TOKEN_TO_BE_REPLACED

We have received a lot of feedback from investors about... END_OF_DOCUMENT_TOKEN_TO_BE_REPLACED

In this overview, we are taking a look at the... END_OF_DOCUMENT_TOKEN_TO_BE_REPLACED

Ever wondered how loans progress over time, or what all... END_OF_DOCUMENT_TOKEN_TO_BE_REPLACED