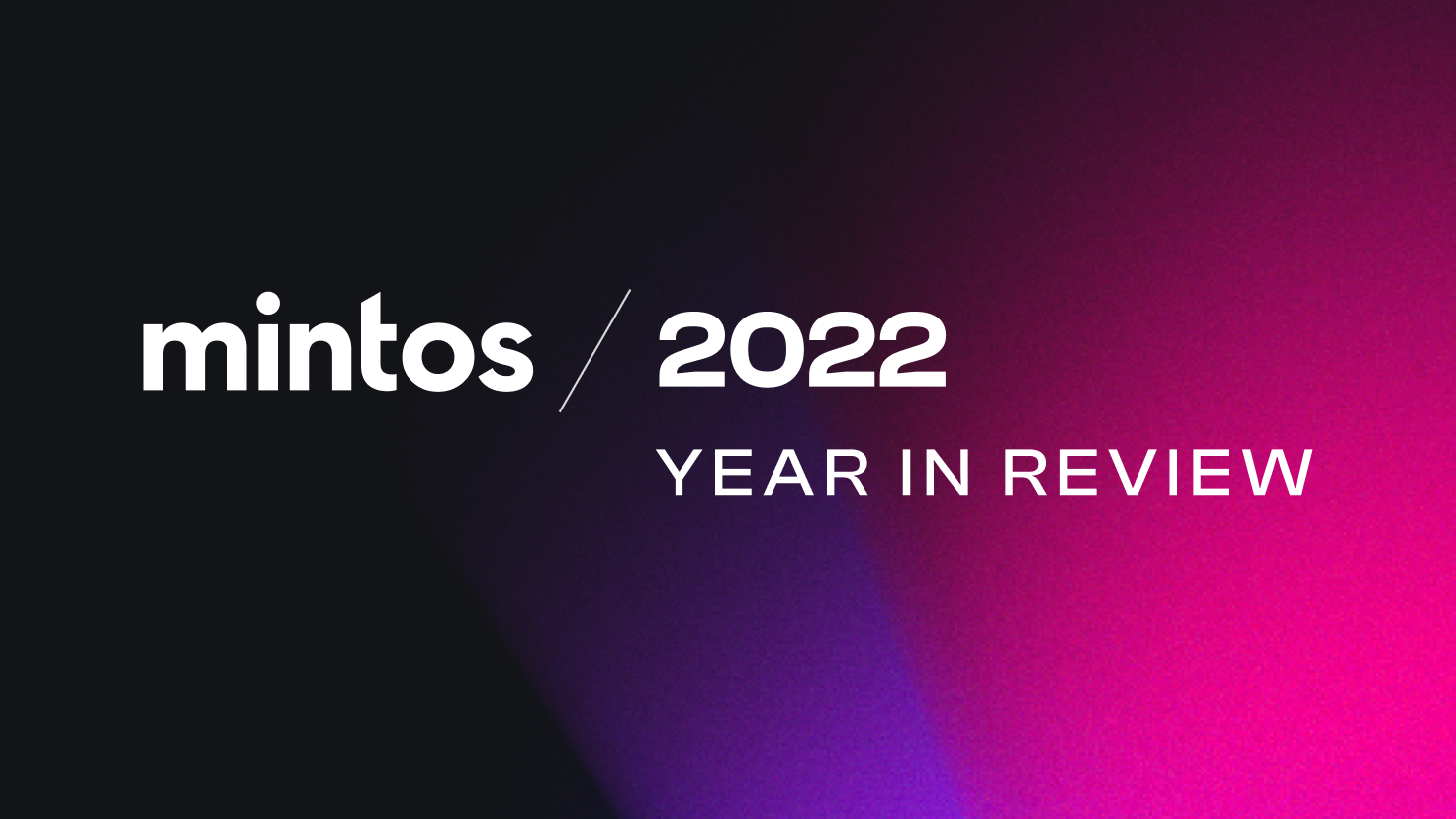 2022 was a year of challenges, but also huge wins for Mintos and our investors. Looking back briefly on 2022, we launched a new financial instrument, Notes, benefiting our investors with investor protection mechanisms. We also celebrated reaching a milestone of 500 000 registered users.

With key economic developments like the war in Ukraine and the side effects of the COVID-19 pandemic playing a huge part in how the financial markets performed over the year, it was certainly a defining year for us.

The war in Ukraine led to a trickle-down effect that touched most financial markets negatively. At Mintos, the effects were felt too. Significant changes were seen in our payment flows arising from sanctions following the war. The good news is that we stabilized recovery efforts, despite the challenges we faced.

While tech stocks and cryptocurrencies were likewise affected significantly, our net average return in 2022 showed stability, with signs of better things to come in 2023.

Let’s take a closer look at our year in numbers for 2022. 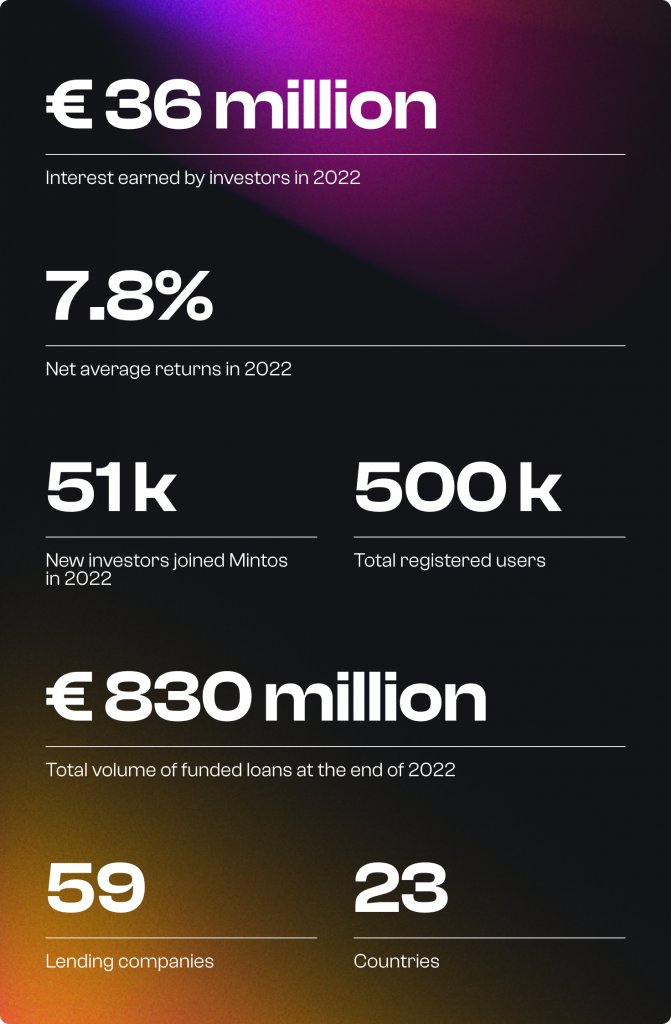 With global tensions at an all-time high in 2022, it was an unpredictable year that we embarked on cautiously.

Our CEO and Co-Founder Martins Sulte reflects on the markets, “Impacted by ongoing supply chain issues, unstable demand, and energy uncertainty caused by the war in Ukraine, inflation drove the markets in 2022. With central banks raising their interest rates, the stock market went into a bear market. The S&P 500 index finished 2022 down by 19%, and tech stocks were hit particularly hard.

The alternative investment market was also impacted. Cryptocurrencies took one of the biggest hits in 2022, making headlines worldwide. In contrast to the decline mentioned above, rates at Mintos showed promising growth. With stable returns, average interest rates in EUR surged from 9% to 14%.

Peteris Mikelsons, Head of Partnerships at Mintos also reflects, “Looking into 2023, inflation seems to be subsiding. However, uncertainty is still present, which implies that the high interest rate environment is likely to remain throughout the next year. The lending companies on Mintos have therefore implemented risk mitigating activities such as tighter underwriting policies.”

In May 2022, Notes became available on Mintos. With the arrival of Notes, our investors gained the benefits of investing in a regulated environment following the MiFID II investor protection framework.

Unlike in an unregulated environment, our investors benefit from investor protection mechanisms:

Inese Lazdovska, General Counsel and CCO, proudly shares about the launch, “One of the key milestones reached by Mintos in 2022 was the launch of Notes and the completion of the transition of Mintos’ product offering to financial instruments.

The Notes launch was a complex project that required meticulous planning and management, making it a true challenge. Every person working at Mintos and every lending company who took part in this transition contributed to us reaching this massive milestone. The legal and regulatory side also played a significant role in the process.

Simply put, I am beyond proud of our team and what we have been able to accomplish. We are truly grateful to our regulator for both challenging us and collaborating with us throughout the process. Without them, it would not have been possible.”

We stabilized recovery efforts, despite the ongoing war

Sanctions against Russia (due to the war in Ukraine) and retaliatory measures by Russia had a large impact on financial services in 2022. When these measures were first implemented, there were concerns about the implications.

For one, banks refused to accept payments in RUB, making it almost impossible to exchange the currency. Transactions from Russia were disallowed, and legislative limits were ultimately imposed on RUB repayments.

While some payment flows have been reestablished, certain limitations imposed by the Central Bank of Russia still apply. A RUB 10m limit per month on transactions was established and is currently active, and is the key reason for payment flow disruptions. As such, numerous companies were unable to make their payments to Mintos.

Martins Valters, COO and Co-Founder of Mintos shares, “It’s been a rollercoaster of a year for Mintos’ recovery team. The war in Ukraine means that we (and in fact, the majority of the Western world) were faced with the challenge of receiving money from investments made in Russia, in light of various restrictions and sanctions from both the EU and Russia.

As a result of work initiated during previous years, 2022 also highlighted the number of cases brought to the court that were ruled in our favor (such as Dziestaka and GetBucks Botswana), while others are still in progress. This has demonstrated the strong legal basis in our claims. While effective, legal action is not necessarily the most desired route to take, as the proceedings are time-consuming.

Meanwhile, the results of work done in prior years continued to pay off, which brings the expected lifetime recovery from the cases that have gone into default to a solid 60%.”

In 2022, we experienced a constant stream of new registrations, leading to our breakthrough of 500 000. The trends also showed that more women are investing, as 17.3% of our new registrations in 2022 were women.

We are now available in French

In 2022, Mintos has launched in France, with full website functionality now available in French. With investor interest in France growing, we hope to reach a wider audience of French-speaking investors on a domestic and international level.

As we continue to expand into more countries and offer more languages in 2023, we look forward to growing continuously with investors.

Mintos Insight February: 2023 forecast and 2022 reflections on the state of the investment market

Insights into the tech industry from the engineer perspective